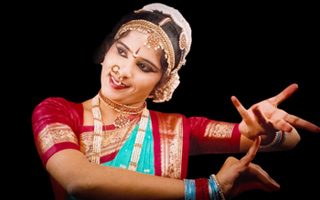 “Art is our way of life”

“The strength and beauty of art forms lies in its ability to integrate the physical, emotional, intellectual and spiritual dimensions of mankind”.

Guru Vidushi Asha Adiga Acharya is an accomplished Bharatanatyam dancer and Carnatic music performer. She has been in this field for more than 34 years as a student, a performer, a choreographer, composer, and an educator. Asha has proved her versatility by learning and performing other classical and Indian folk dance forms. She was a child prodigy and represented India on the international stage as a dancer at age of 9 and has given performances all over India, in Paris – France and at several places in the USA such as New York, New Jersey, Washington DC, Michigan, Indianapolis, St. Louis and Illinois.

She has visualized, choreographed and directed, many classical dances, folk dances, dance dramas, ballets and composed several music, some of which are “Shiva Shakthi”, “Rama-Eshawara”, “Sri Guru Sai Leela”, “Sri Sathyanarayana Katha”, Nadham and many more. She started her learning at a young age from Vidwan Raja Gopala Bhagavath and Vidushi Poornima Bhagavath as her Carnatic classical music & Bharatanatyam dance teachers in Kalakshetra dance style. She secured a 3rd rank in dance Vidwath higher proficiency exams conducted by Karnataka Higher Education Board, India government. She is also a recipient of the Indian government scholarship in senior dance. She has received several awards and accolades to her credit such as J.C Club “Outstanding Young Indian” Award, “Kala Isiri Award” by Champika Pathrike, Air India “Rank Award”, “Sharada Puraskara”, she is also a awardee of extraordinary artist greencard in USA and she is an esteem member of the prestigious international dance council CID – UNESCO. Asha believes in preserving and sharing the Indian culture amongst people through Indian classical art forms. Thus, with a vision to promote artistic and professional excellence, she founded the Acharya Performing Arts Academy Inc in Illinois, and she is creative artistic director in Nupura Geetha Inc., a Nonprofit organization for art and culture in Illinois, USA. . 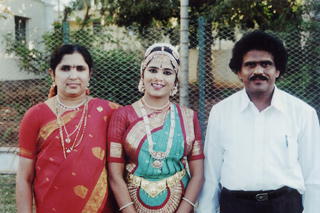 For more than 25 years, Asha has been in art field as a student, a performer and as an instructor. Asha was introduced and encouraged to the art forms at a very young age, by her parents Smt. Srimathi Adiga and Late Shri Chandrashekhara Adiga who themselves were very much involved in cultural, religious and social service organization, along with her elder sister Usha.

With guidance of her gurus she founded “Sanskruti School of Dance ( In India)” and also conducted many classical dance, folk dances and music workshops at various places in India.

Asha received her carnatic classical music training from guru Vidhwan Raja Gopal Bhagavath for many years and also took training in this area with several gurus.

Asha secured 1st class in singing exams conducted by Secondary Board of Karnataka, India government with guidance from her guru Vidhwan Raja Gopal Bhagavath. She also won many prizes at state and national level singing competitions.

She also learned under the tutelage of several gurus like Miss. Sharada, Mrs. Suvarna Badarinath for light, folk music and also got guidance from Dr Murugesh Babu.

She has given many Carnatic classical music and light music performances in USA as well as in India.

She got introduced to theater form in ‘Bhumika’, the drama organization from Vanitha Samaja Davanagere, India and got chance to learn from ‘Neenasam’ Mr. and Mrs. Manula Badami and Mr. Kavathar and others. To presume more knowledge and education in the theatrical area she presently pursues her degree in Theaters at Illinois, USA.

Asha’s creative and unique dance choreography which is combination of Bharathanatyam, Kuchupudi and Yoga in which she keeping 4 pots on her head, holding light in both her hands and while balancing them she dances on floor and on a plate giving various different ‘yoga’ postures, is very popular and crowd puller. She has performed this in more than 100 shows and each mesmerizing the crowd equally or better than the previous.

She has given dance performances in Paris, France in the year 1992 (when she was just 9 years old) after getting selected in the workshop organized by Thirupathi Dance Academy of India. This gave her more recognition, motivation and responsibility to learn and contribute further to the art form.

Asha did most of her performance in India as duo paired with her elder sister Usha wherein they were referred as “Adiga Sisters”.

Asha has given classical dance concerts in many USA cities like New York, New Jersey, Washington DC, Michigan, Indianapolis IN and Illinois. Such as: 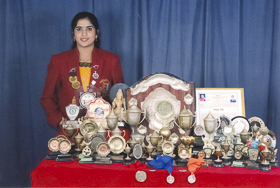 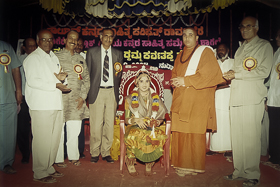 Asha deems art as God and she is just a devotee of the art God. She always has hunger towards learning other art forms and volunteers to share the same to the world. Her family, friends and student disciples and mainly her husband Srinivasa Acharya has always been supportive towards her art work.